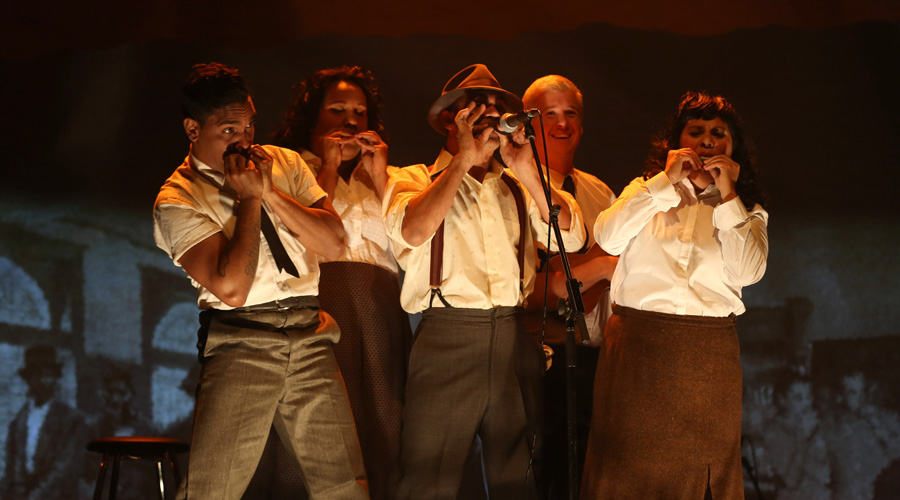 Country Song: A fictionalised story inspired by the life of Jimmy Little
by Reg Cribb | Original concept by Michael Tuahine

‘Country Song’ is a beautiful, musical, witty and warming journey that celebrates the healing power of music. It will take you on a heartfelt journey with toe-tapping tunes and larger-than-life characters. From the director of the original stage play ‘The Sapphires’ (Wesley Enoch) and co-writer of ‘Bran Nue Dae’ (Reg Cribb), ‘Country Song’ is their new work inspired by the life and music of Indigenous singing superstar Jimmy Little. The stellar cast includes Michael Tuahine, David Page, Elaine Crombie, Megan Samardin, Tibian Wyles and Bradley McCaw.

The premise of ‘Country Song’ is this: Jimmy Little is waiting backstage. He’s been asked to perform the national anthem, in front of an audience that love him and his music. He is an Australian icon; an entertainer first and foremost. But what does it mean to sing this song now? Does it matter? Who is he really singing for?

In ‘Country Song’, Jimmy is whisked on a fictional road trip to his past as his story weaves through the history of major social changes of the 1970’s. Along the way we hear stories of singers Auriel Andrew, Bobby McLeod and Lionel Rose in this tribute to the era and the music that was a soundtrack for a generation. Once a smiling, cheeky child of Vaudevillians, now a poster boy for Indigenous performers, Jimmy takes us through the thoughts of an artist who must weigh up the political power of his voice.

Acclaimed actor and musician Michael Tuahine came up with the original idea for ‘Country Song’ after being inspired by ‘Walk the Line’.

Tuahine, who plays the lead in ‘Country Song’, had a close relationship with the Jimmy Little after the pair met in 2001.

“When Jimmy said to me, ‘Boy, you are doing a good job’, it was like a blessing from an elder, said Michael, a passionate country music fan.

“Jimmy and I were mates, we would talk on the phone, we toured together – I followed him everywhere. One day over lunch, I said to Jimmy I’d love the opportunity to play him, sing his songs and tell his story. He liked the idea.”

“He said to me, do your research. I pulled out about three foot of material!

“I’m not a writer but I had started to bring the story together by talking to everyone Jimmy knew – his band, old disc jockeys, his family – anyone who could help tell Jimmy’s story. I read old newspaper articles, anything I could get my hands on to get the full picture,” said Tuahine.

‘Country Song’ is built on stories that aren’t widely known. Jimmy’s biggest hit, Royal Telephone was a No. 1 song in Australia in 1963 and topped the charts ahead of The Beatles and Elvis, yet he couldn’t perform in many clubs and pubs because he was Indigenous.

He challenged what people thought of Indigenous performers with his sheer talent and charisma.

“In my culture, you become the custodian of a story and you tell it to the best of your ability. That’s what Reg Cribb, the writer, and I are trying to do. We want to celebrate and capture the integrity and wonderment of who Jimmy was. We want to share his life, his incredible music and his impact on other musicians,” Tuahine said.