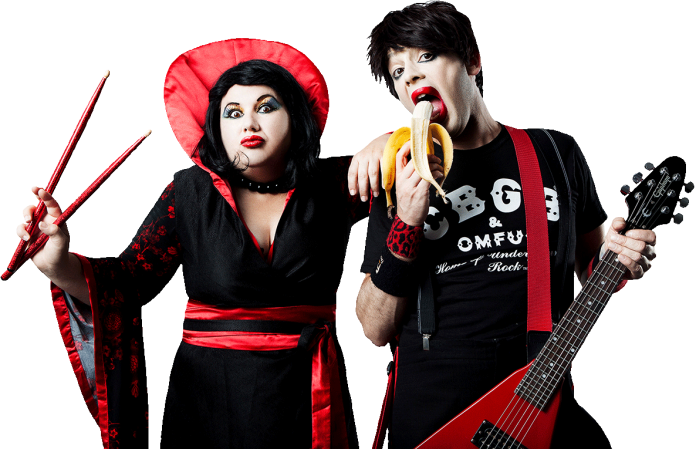 Brunswick Picture House — are you ready to speak dance? Fans of Spinal Tap and Flight of the Conchords, say “Hallo!” to your new favourite band.

Dysfunctional brother sister duo, Otto & Astrid, from the cult band Die Roten Punkte are coming to thunder through a night of their hits. And misses.

For those of you unlucky enough to not yet be familiar with Berlin’s Prince and Princess of art rock and Europop, Otto & Astrid are Die Roten Punkte (The Red Dots).

Recently having completed a Canadian tour, the teutonic twosome have also been performing with Australia’s own Circus Oz — Rock Bang: a circus rock opera with acrobats, stunts, high falls and dancing lions featuring Otto & Astrid. They’ve also had a run at Soho Theatre in London, at Darwin Festival and made a web series chronicling their rehearsals for which has so far had close to half a million views.

Orphaned as kids when Astrid was 12 and Otto was 9, the brother and sister duo found shelter in a Berlin squat and never looked back. An Otto and Astrid gig is a wild, rock‘n’roll cabaret ride, full of hilarious, truly catchy and award-winning pop songs, constantly interrupted by the squabbling of the dysfunctional siblings.

Otto & Astrid’s Rock n Roll Explosion will be one of the most irreverent and hilarious gigs you are ever likely to see. A lipstick-smeared, tantrum-loving, sonic collision between The B-52s, The Pixies, Kraftwerk and early Ramones with ridiculously infectious songs, Otto and Astrid are truly one of a kind.