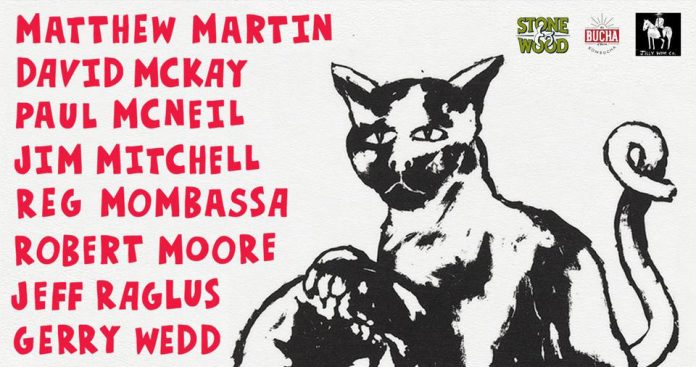 MAMBO rose out of the early 1980’s Sydney post-punk scene, founded by Phantom Records visionary entrepreneur Dare Jennings. Drawing on the talents of self-taught outsiders, muso-slash-visual artists, poster & comic artists and refugees from the Yellow House, Mambo was more an art movement than a clothing brand, built on a foundation of subversive satire, vernacular appreciation, music, surf and politics.

Between 1984 and 2002 (Peak Mambo Era), a core group of around 15 Mambo artists created art, text, graphics, logos, loud shirts and schmutter that payed scant regard for selling units and more interest in turning themselves on (or the ‘squares’ off). In spite of this disregard for the mainstream, Mambo evolved into an international brand and national icon, leading to Mambo’s art direction of the 2000 Sydney Olympics opening ceremony, team uniforms, and a series of major survey exhibitions throughout the 2000’s.

The impact and influence of Mambo continues to be felt, with Mambo alumni continuing their prolific ways and celebrated ways, and a generation of kids who grew up on Mambo now artists themselves. This ain’t no retrospective.