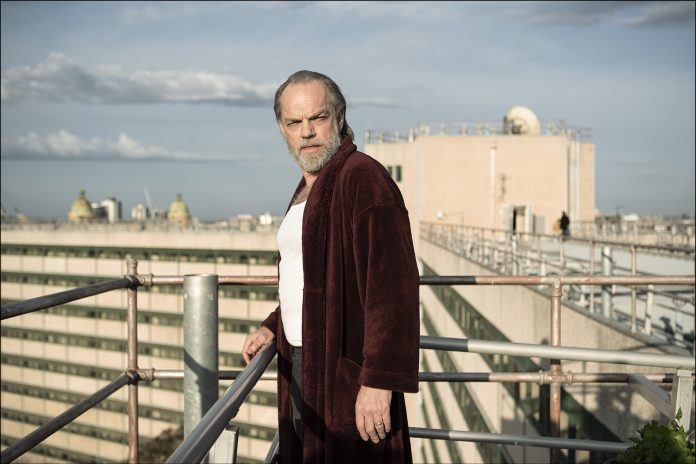 Hugo Weaving in Measure for Measure to open BBFF2019

Selecting Measure for Measure as the Opening Night film for the Byron Bay Film Festival was not an easy call, given the strength of this year’s submissions, says Festival Director J’aimee Skippon-Volke – but it was the natural one.

“M4M has everything going for it: a suspenseful story, Australian filmmakers, much-loved stars and emerging talent, gorgeous cinematography, the Melbourne night-time cityscape glittering in the background, social relevance and a satisfying, if surprising, ending. Shakespeare would recognise the updated plotline and themes and applaud.

“It’s a perfect film to get everyone in the mood, both for the party afterwards and the 10 Festival days to come.”

The trifecta of Hugo Weaving, William Shakespeare and Pawno director Paul Ireland will bring a full serving of drama, style and cultural heft to the Red Carpet Gala Opening at Byron Bay Palace Cinema on October 18.

Not that the Bard will be there of course, but the audience will be wowed by Ireland’s re-imaging of his play – here brought up to date, darkened, and set in Melbourne’s gritty underbelly, where ice, vice and inter-racial rivalries make for a tense urban landscape, with police pay-offs and violence the tactics of first resort.

True to Will’s original script, Weaving’s Duke, as invincible capo, must make himself scarce for a while – to wait out the storm following a racially motivated outrage by one of his lieutenant’s ice-addled customers.

But Duke’s not as far away as he wants everyone to believe, and Weaving imbues the role with the languid omnipotence of an old lion.

Meanwhile, a young Aussie stoner’s encounter with Lebanese Muslim Jaiwara leads to star-crossed love – the catalyst to plenty of subterfuge and “stage business” among the circling crims.

The purity of the young lovers counterbalances the corruption of their setting, and the wide-eyed performances of Megan Hajjar and Harrison Gilbertson are riveting. So is that of Fayssal Bazzi as Jaiwara’s lethally protective brother, a very different role to his goofy migrant in last year’s BBFF outing, The Merger. True to the Bard’s original script of his “problem” play – neither comedy nor tragedy – M4M has a resolution that is a satisfying balance of joy and pain.

The conclusion is much more straightforward in the Closing Night Film, which is also preceded by a Red Carpet arrival and drinks at the Byron Community Centre, with a party to follow. The Cave is a film with a happy ending – and that’s no spoiler, because anyone who watched the news broadcasts about the young footballers being trapped underground in northern Thailand last year will know the outcome.

So how does a dramatized account of the massive, international mission to rescue them hold the tension? Simple: with people power and authenticity. Given that “spoiler” detail, Thai/Irish director Tom Waller wisely focused on the human element, to showcase a wide range of the estimated 10,000 people involved.

Several key participants portray themselves in this retelling, adding to its verisimilitude. Counter-intuitively, the suspense is undimished.

Tom Waller is coming to Byron Bay for the Australian Premiere of his film, and given that up-beat ending, BBFF looks forward to the party afterwards, and the happy memories that linger long after the Festival is over.