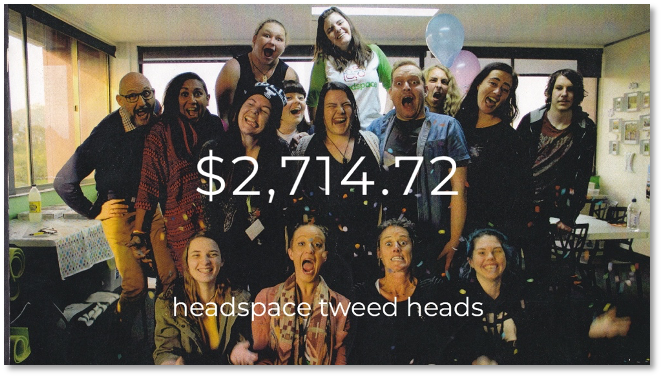 On Saturday 2nd May Cunning Stunts, the team behind Curious and Nudge – awarded Community Event of the Year 2020, held their second FREE live DJ mix & stream, PAJAMAS #2 – DJ’s and PJ’s.

Maya Sutton, daughter of Cunning Stunts co-founders Darren & Sarah Sutton, who recently turned 14 shaved off all her hair and raised funds for local youth charity Headspace Tweed Heads. An important service for our youth, headspace centres and services operate across Australia, in metro, regional and rural areas, supporting young Australians and their families to be mentally healthy and engaged in their communities. More than 75 per cent of mental health issues develop before a person turns 25 and Maya was compelled to make a difference for her community.

The head shave was performed by her Sister – Isabella live on camera during the Cunning Stunts Pajamas #2 live stream. There were 4 x planned stages to the shave – The Mullet, The Bowl Cut, The Mohawk and the final Buzz Cut. During the live event funds were raised with goals surpassed for each of the 4 stages!

Following the event Cunning Stunts also nominated charity recipients for their charity donation fund from Curious – having raised funds in December 2019 for NSW Rural Fire Service as well as donated to It Takes a Town to sponsor a child through pre-school already. The remaining accumulated funds from their Curious Season 4 has now been equally donated between the two top sectors identified from a recent audience survey result – Homeless, and Domestic Violence. $2,231 has been donated to Mullumbimby & District Neighbourhood Centre Inc. and $ 2,231 to Wollumbin Family Support.

A 2019/2020 season total of $14,186 has now been donated from this abrupt end to their season 4 and a whopping Grand total or $325,371 has been donated to date, supporting 28 x local grass roots charities. All of this is helping residents of Northern NSW achieve a better quality of life.

Over four hundred people participated in the online event sending messages of support and encouragement as well as donating to the cause! headspace Tweed Heads were thrilled with the response and donation, posting on Facebook “Wow, thank you so much! What an incredible effort and what a generous community you have created around you Cunning Stunts”

“At times like this it is so important to continue to support each other in our communities however we can, this is another example of how we put the FUN in FUNdraising whilst supporting our underfunded and much needed local charitable services” said the Cunning Stunts team.