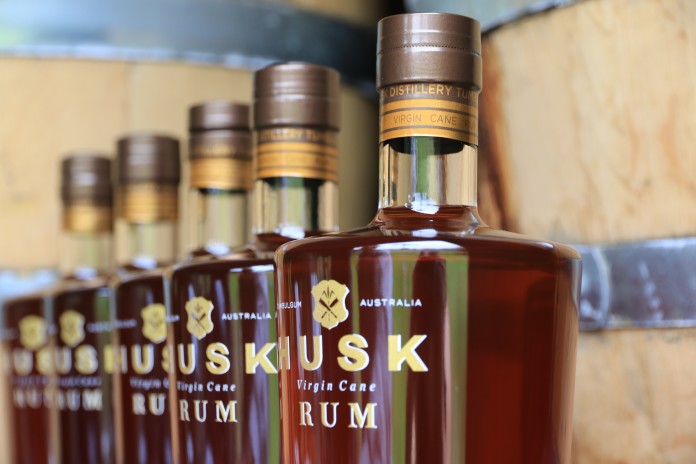 Husk Distillers, the Northern Rivers own craft distillery, have released the very first barrel of their paddock-to-bottle Agricole rum – Husk Virgin Cane Rum. First offered in December just in time for Christmas, the retail allocation sold out in 3 days, with thirty reserve bottles landing in selected venues around the North Coast and Australia this week.

‘The release marks a new chapter for us at Husk Distillers, and also for Australian rum in general,” said Paul Messenger, founder and distiller at Husk. “We started working on a new style agricole rum five years ago and this first release was made from sugar cane harvested at our plantation distillery in North Tumbulgum in 2012.”

Husk Rum is made from first press juice of cane cut and crushed on the same day, together with yeast propagated in the distillery, which is overlooked by Mt Warning. The fermentation takes 5-6 days and is longer and slower than most Caribbean agricole rums. The rum is then double distilled in a unique copper pot still before being aged for a minimum of three years.

‘We use a double barrel ageing process. We first fill new heavily charred American oak barrels for 6-12 months from where most of the colour and much of the flavour is derived. We then transfer the rum to finish in ex bourbon, ex port or old reserve barrels for further flavour development and mellowing.’ ‘Unlike traditional sweet, caramel-rich rums, Husk Virgin Cane Rum is dry like a malt whiskey, but boasts toasted oak, herbal, vanilla and subtle caramel notes. It’s meant to be sipped rather than mixed, but also tastes great on a hot day with lightly muddled orange, lots of ice and chilled Indian Tonic.’

Husk Rum is made by the family run distillery that launched their first product, Ink Gin in August 2015. Ink Gin, the floral-infused gin made with 14 organic botanicals, including locally grown lemon myrtle and orange peel, has proven to be very popular and is distributed to selected bars and outlets from Brisbane to Sydney and is available nationally online through www.inkgin.com.

After quitting his day job in the corporate sector, founder and distiller Paul Messenger travelled to Jamaica and Barbados before landing in Martinique where he learnt to make French-Caribbean style agricole rum. Agricole rum is made from freshly crushed sugar cane juice rather than molasses, and because of its higher production cost it accounts for only 3% of the world’s rum. Although it is rarely made outside the Caribbean, Paul saw potential to develop an Australian expression agricole rum, that would be quite distinct from both traditional molasses rums and the French Caribbean agricole rums.

Paul studied whisky making under Bill Lark, the ‘Godfather’ of Tasmanian whisky, and mentor Mike Delevante, known as “the Rum Doctor” who he met in Kingston. This mixed education is reflected in the production methods he uses to make Husk Rum. The local Northern Rivers terroir, long slow ferments, malt whiskey style pot still double distillation, and his own double barrel maturation methods give Husk Rum a unique Australian expression. Husk Distillers operate a true paddock-to-bottle plantation rum distillery based on small scale cultivation and harvest methods adapted specifically for rum making. Much of the work is done by hand. The cane is cut by hand and with a 1950s vintage set cutter, and the cane sticks are hand fed into a small single phase crushing mill.

‘We live in a very fertile sugar cane producing region, so I wondered why no one else was doing it – I’m not wondering any more,’ said Paul. ‘It’s pretty hard and hot physical work.’

‘The result is worth it though. I’m very happy with our first barrel – though quite young, our first 3 years old is a good smooth sipping rum.’

Dre Walters, President of the Sydney Rum Club and manager of Sydney rum bar The Lobo Plantation, agrees. ‘From first taste I think its absolutely wonderful. I have tasted many Australian rums in the hope that we can try to compete on a world stage. The older expression will be amazing to see roll out.’

Only 271 bottles were filled from Barrel 001 produced from the 2012 harvest. While you’ll have trouble getting your hands on a full bottle, you can still sample Husk Rum at selected bars for a limited time. See below for local stockists. Expect the next barrel release towards the end of the year.

Stockists in the Northern Rivers: