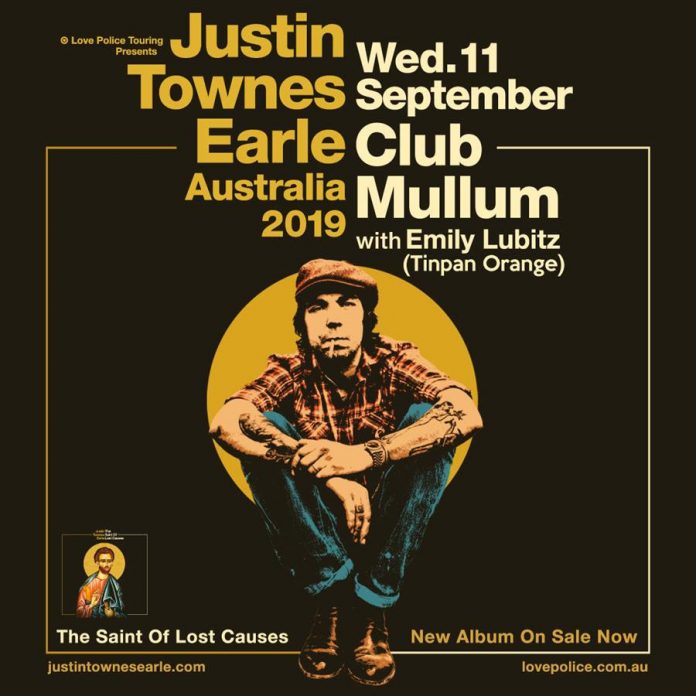 No stranger to the Southern Hemisphere the formidable singer-songwriter
Justin Townes Earle, on the back brilliant new album “The Saint of Lost Causes,” will 3return for his biggest tour down under yet playing 16 dates across New Zealand and Australia in August and September 2019.

“Australia is one of my favourite countries to tour, and my fans there have always come out and supported my shows and my new music. I’m really looking forward to coming back for what will be my biggest Australian tour to date.”

Since JTE’s last return down under in 2017 he got married, became a father and released his seventh and eighth full-length albums, 2017’s “Kids In the Street” and the brand new “The Saint of Lost Causes” which saw him reunited with longtime producer Adam Bednarik in Nashville.

Earle’s fierce fidelity to his creative muse has been a consistent thread throughout his young life. Born in Nashville on January 4th, 1982, he grew up as the son of country-rock iconoclast Steve Earle, who gave him his middle name in honour of his mentor, the brilliant songwriter Townes Van Zandt. Justin quickly came into his own as a songwriter and performer, displaying a natural talent for deeply revealing lyrics that reflected his often-harsh life experiences, and a musical approach that effortlessly integrated elements of blues, folk, and country. His 2007 debut EP Yuma set the stage for a steady stream of acclaimed albums.

This will be Justin’s his 9th tour of Australia (check that number) having been here last in October 2017 to play Australia’s leading Americana Music Festival ‘Out On The Weekend’ where he blew them away and this time will be no different.

JTE will be supported by the mesmerising EMILY LUBITZ
of TINPAN ORANGE – not to be missed!