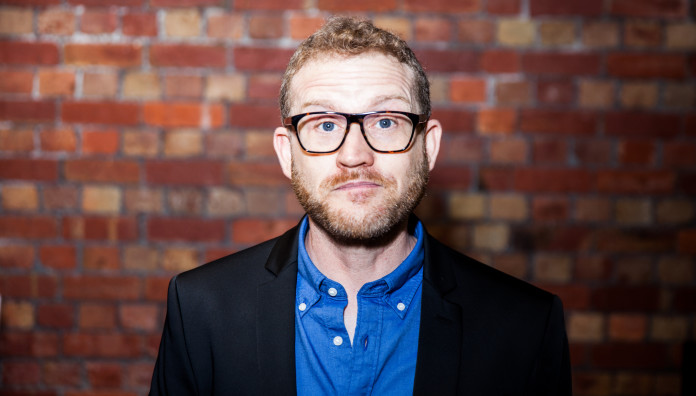 John Safran, a Paladin dwarf and an ISIS supporter walk into a Catholic Church. Neo-Nazis are on the same side as the Jews. Pauline Hanson denies she was ever against Asian immigration… Welcome to Australia 2016. If it sounds mad, that’s because it is. And funny. But apparently that’s a dangerous thing now too – as Safran has just found out.

Join us for this entertaining Feature Event presented by Byron Writers Festival and NORPA as Safran reveals his alarming adventures in a weird world of misfits whose extremist views (and behaviour) have helped propel the rise of the alt-right. Welcome to a place in time where blonde-haired, blue-eyed boys grow-up aspiring to be ISIS freedom fighters, an Islamic preacher quotes Monty Python and newly arrived immigrants oppose multiculturalism. Yep, that’s right. It all depends what you mean by extremist…

John Safran will be in conversation with arts journalist, provocative performance artist and producer Bec Mac discussing Safran’s latest book Depends What You Mean By Extremist.

It’s Melbourne, 2015. John Safran (who’s always been interested in racists) rocked up to observe the second ‘Reclaim Australia’ versus ‘No Room for Racism’ rally. It turned out to be a multicultural anti-multicultural rally. Confused? So was John. And even more confusing, each of the opposing sides had appropriated the swastika for their banners. Intrigued – and somewhat alarmed, John began digging a little deeper.

“So it turns out I wasn’t the only Jew at the rally. There were two and a half more. Not protesting against the United Patriot Front, but supporting them? That clinches it. Skinheads side by side with Jews; immigrants against immigrants; Shermon’s promise of a far-right hajj – this is a case for John Safran, Jew Detective.”

In the process he invariably finds himself in precarious and funny situations; slamming down tequila shots with Neo-Nazis, threatened with arrest by the Australian Liberty Alliance, praying with evangelical Christians, and arguing over scripture with an Iman, an Islamic preacher and a Paladin Dwarf.

He crosses the country and turns up where he’s not wanted; from the lawns of Parliament House in Perth, to a fascists rally for Golden Dawn in Brisbane, and the highly anticipated 10th anniversary of the Cronulla Riots in Sydney. Along the way he finds himself chastised by anarchists, outwitted by Jews, set-up by white nationalists, stood-up by Hanson and warned-off by Satan.

With an eye on what’s happening in his own community; escalating violence against Rabbis, increased security at synagogues, anti-Semitic propaganda in the mail, Safran takes up Israeli martial arts and starts carrying a knife. Then with sudden clarity he realises that it’s exactly these incremental changes that make way for a new way of living, of thinking, of being; that become the small stepping stones to radicalization. Just how rogue will Safran go?

Inevitably as Safran engages with the opposing factions the more compromised he becomes; privy to their secrets, he is acutely aware of his potential power to play the puppetmaster and change the course of events. Ultimately his uncanny knack for inserting himself into the action reveals an alarming common thread of ‘magical thinking’ among these outliers, that is, their conviction that there are no coincidences and a sense the end times are coming.

‘”I think about all the people I’ve been hanging with over the year, Pastor Daniel, Hamza, and the rest… It’s hard to cut a deal with people who think that what they’re doing will bring on the Messiah.”

In Depends What You Mean by Extremist Safran unravels the complex tangles of race, religion, ethnicity and nationalism at play in Australia today. He calls out the contradictory and illogical arguments proffered by the extremists in our own backyard, while reminding us (with a raised eyebrow to the reader), of the vital and often dangerous role that humour and satire can play in tackling a seemingly global rise in hate, racism and extremism.