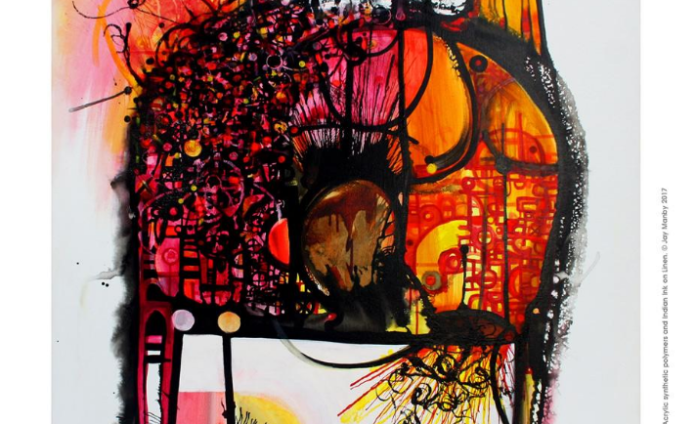 “Jay’s works are all evocative of an Aussie rogue spirit…chaos and symmetry…coloured with the brilliance of the landscape…louche and sweet.” Zika Vuletic

Jay Manby’s work is driven by process. He is opportunistic, recycling and making use of incidental elements that push a work towards revealing its true nature. The process begins in the abstract, and at a certain point, the narrative enters.

Working from his studio or on the lawn of his home in the Northern New South Wales countryside, allows Jay complete freedom to move around a canvas. He likes to work large- there is an unbridled physicality to his work that demands scale. Much like action painting, the canvases see-saw between order and chaos. This brings a fragile tension and energy to the work.

Jay studied Design, Image Making and Visual Communications at the University of Technology Sydney and worked as a celebrated designer and art director for many years before heeding the call to his true artistic purpose: an exciting and authentic new painter.

Jay is known for creating some of the iconic imagery in Australia’s music industry. He has been nominated for an Aria for album design (Cruel Sea), and his work has been collected by Sydney’s Powerhouse Museum. He has presented solo shows at the Lismore Arts Centre including ‘Unwild ‘(2012) and ‘Bird of Paradise’ (2011).

From 2014-16 Jay has worked in black and white and square format only, creating an exciting new body of work titled Got ID. A visual study into digital identity. He is also making an animated film based on these 44 works. Themes of Identity continue in his new work.

In 2016/17 Jay has been working on a number of new series of paintings as well as a large collection of works on paper. In mid-June 2017, he will present Instinct an exhibition of recent works at Lone Goat Gallery Byron Bay.