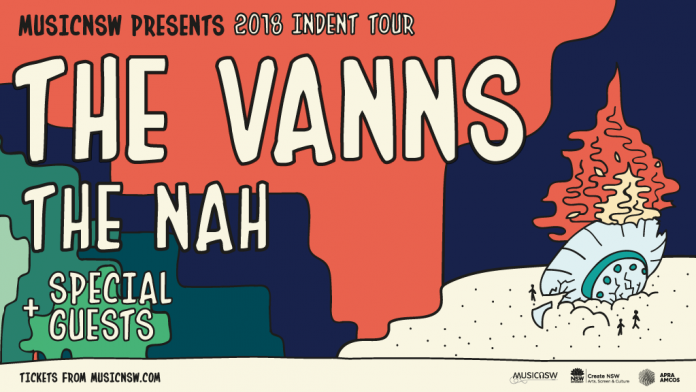 ‘Indent’, the annual MusicNSW regional youth touring initiative, is excited to announce that the next Indent tour is bringing Wollongong locals The VANNS and The Nah (plus a local opening act) to a bunch of NSW towns next March for a run of all ages shows!

Bringing the smooth blues-tinged alt rockers The VANNS and the soft punk stylings of The Nah to Bega, Moruya, Newcastle, Port Macquarie and Byron Bay in March 2018, The Indent Tour provides an opportunity for regional youth to collaborate on the production, promotion, and set up of a live show while also bringing great music to areas who might not otherwise get touring acts on a regular basis. “We’re all really excited for the Indent tour because we actually all grew up in regional towns; Shal spent her teens living in Dubbo, Jess is from the Blue Mountains, Chelse is from Albion Park and I’m from Nowra, and we all now live in Wollongong. While there are heaps of great aspects to growing up regional, I felt like I wasn’t really exposed to diverse artists. It would have been real cool to go to a show and see a woman get a bit shreddy on stage or to see some diverse genres being represented or even just be exposed to a bit of LGBT+ positivity. We’re also really excited for Bega because we’re really into cheese”
– Belinda Quinn, of The Nah

Working with local youth, The Indent Tour provides hands on experience in how to put on a live show -including promotion/marketing, setting up equipment, sound checks, ticketing, venue liaison and more.

Any young music industry hopefuls involved in the Indent Tour will get hands on experience in putting on a live gig for a band or solo artist, through a series of free workshops run by the Indent production team in the weeks leading up to the shows.

“We’re absolutely thrilled to be taking two incredible Wollongong bands on road around NSW for the 2018 Indent Tour. Alt-Indie legends The VANNS will be headlining the 5-stop tour, with support from indie surf punk 4-piece The Nah. The 2018 tour will stop by Bega, Moruya, Newcastle, Port Macquarie and Bryon between 16th – 25th March 2018. We’ll also include a bunch of local supports from each town to join the line-up and can’t wait to work with local Indent crew to put on a crackin’ all-ages tour with outstanding independent talent.” – Emily Collins, Managing Director MusicNSW

MusicNSW presents: The Indent Tour with The VANNS and The Nah

All shows are all ages and drug and alcohol free. Tickets via www.musicnsw.com “We are thrilled to be heading out on the road again for the Indent All Ages Regional Tour in March 2018. Being able to play to younger crowds in regional areas that don’t get to see gigs regularly allows us to bring an element of Australian music into their world and help inspire people to start their own bands and write their own music.” – The VANNS

Forming in 2012 on the south coast of NSW, The VANNS have been touring constantly, supporting the likes of Sticky Fingers, Kingswood, Delta Riggs, and festivals like Party In The Paddock and Yours and Owls. Their rambunctious energy, catchy hooks, and roaring guitar lines have made their dynamic blues-tinged rock and roll a favourite on the live scene, and built a legion of fans.

The Nah are four soft-punk gems from Wollongong, NSW. Their sound is influenced by everything from melancholic indie to semi-ironic surf rock. Their influences are: Blondie, LCD Soundsystem, SCABZ (are shit), The Roches, Talking Heads, women, trans and gender diverse songwriters, nature, science, feelings and justice.

MusicNSW runs a range of programs, masterclasses, panels, tours and showcases as well as providing emerging musicians with advice and resources. Our aim is to empower, support and connect artists and industry. Find out more about what we do and how you can get involved at www.musicnsw.com.