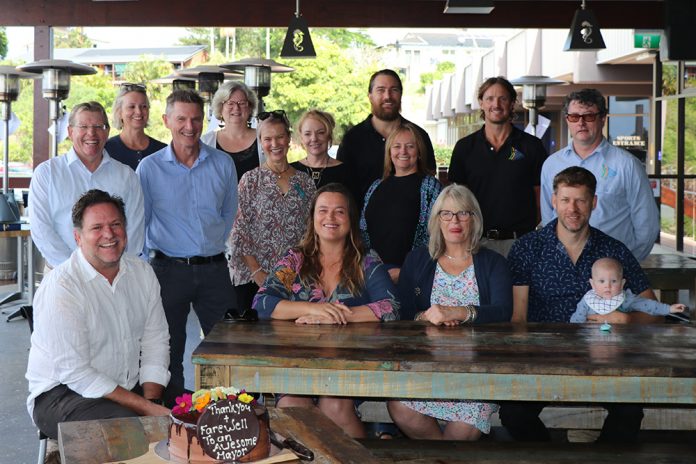 The General Manager of Byron Shire Council, Mark Arnold, has thanked Mayor Simon Richardson for the enormous contribution he has made to the Shire in his 13 years in Local Government.

Mayor Richardson retires today serving four years as a Councillor and nine as Mayor of one of the most high profile shires in Australia.

“Simon has given his absolute ‘all’ to the Byron Shire community and on behalf of staff and Councillors I thank him,” Mr Arnold said.

“Being a Councillor is a tough job and some would argue that in the Byron Shire it is even more difficult and Simon has never shied away from always advocating for the best outcomes possible for the community he loves,” Mr Arnold said.

“Simon was not afraid to make difficult decisions, sometimes in the face of intense criticism from some sectors of the community and this is the mark of a good and true leader,” he said.

“Despite some very difficult personal circumstances in recent years, Simon has never wavered from his commitment to the Byron Shire and he leaves very big shoes to fill,” Mr Arnold said.

“He challenged us and working with him has been an absolute privilege.

“The incredible changes in the Byron Shire this term can be attributed to Simon and the Councillors who worked respectfully and collegiately with staff to realise change and to develop productive relationships with the NSW and Commonwealth Governments and the community,” Mr Arnold said.

An extraordinary meeting will be held on Thursday 13 May when Councillors will vote for a new Mayor.

Mayor Richardson informed the Council and community of his decision last Thursday (22 April 2021).

“Many people know the last couple of years have been very difficult on a personal front and I cannot strive to be a great Mayor and a great sole parent to two beautiful girls,” Mayor Richardson said.

“I choose to be a great dad and while I will miss the privilege of working on behalf of my community, I am excited about this next chapter in my life,” Mayor Richardson said.

“Being a Mayor and Councillor has been a humbling, exasperating, difficult, and incredibly wonderful experience,” he said.