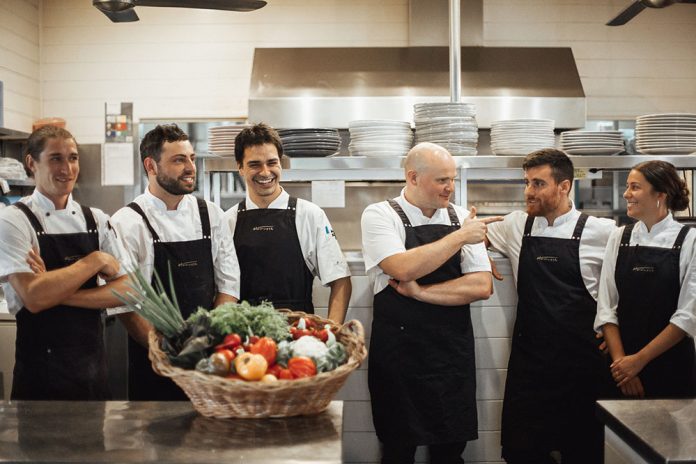 Harvest Newrybar have appointed talented chef Alastair Waddell to lead its culinary team. Alastair brings awareness of sustainable practices, a passion for local seasonal produce, and a sense of adventure and creativity into wild and native ingredients. Alastair will be involved in all aspects of the business, from developing new dishes for the restaurant, and creating bespoke menus for wedding and events, to experimenting with the artisan bakery and its historic 108-year-old wood fired oven, and overseeing the daily-changing offering at the boutique Harvest Deli with dry ageing room.

Alastair has been discovering all that the Byron Hinterland has to offer via weekly outings foraging with in-house wild food researcher Peter Hardwick. Each Wednesday, the duo will present a selection of ideas and flavours on a plate after a day of foraging and developing (including pickling and fermenting) at the Wild Harvest Sessions. This is an experimental degustation menu with matched wines and the winning dishes make it to the restaurant’s seasonal menu. As an advocate in root-to-stem cooking (nose-to-tail but for the garden variety), Alastair is looking forward to working alongside Harvest’s permaculturists Rachel Rouse and Janene Price, and making the most of Harvest’s sprawling gardens, using all elements of their produce.

“Passion lies in utilising the food from the land around us, from local farms and foraged items to our own garden. Building a close relationship with Peter Hardwick is helping me to unlock flavours from native ingredients and enhance dishes with the use of his unique ferments. I always look to extract the purest flavour from produce and serve it in a way that does the product justice.” – Head Chef Alastair Waddell

About Alastair Waddell
Born, educated and trained as a chef in Scotland, Alastair notably worked at both One Devonshire Gardens and Cameron House Hotel in Glasgow under the tutelage of renowned Scottish chef Paul Tamburrini. After travelling to Europe and the USA, he settled in Australia in 2008 and worked at Guillaume Brahimi’s two-hatted Bistro Guillaume in Melbourne.

Alastair joins Harvest after leading the team at Southern Ocean Lodge on Kangaroo Island, and previously six years at Qualia on Hamilton Island where he was recognised with several awards including HM Magazine’s Hotel Chef of the Year (2012 and 2014) and a one-hat rating in the Australian Good Food Guide (2014 and 2015).

About Harvest Newrybar
A short ride from Byron Bay, Harvest Newrybar restaurant, bakery and deli showcase the diversity of the wonderful local region. Seasonal food sourced from artisan producers and the restaurants own edible gardens, sit alongside Australia’s native and wild ingredients, in the historic village of Newrybar. Harvest have received multiple accolades over the years; most recently, a hat in the Good Food Guide 2018, Best Small List (50 Wines) by Gourmet Traveller Wine 2017 and Delicious. 2017 – NSW Top 100 #No.21.