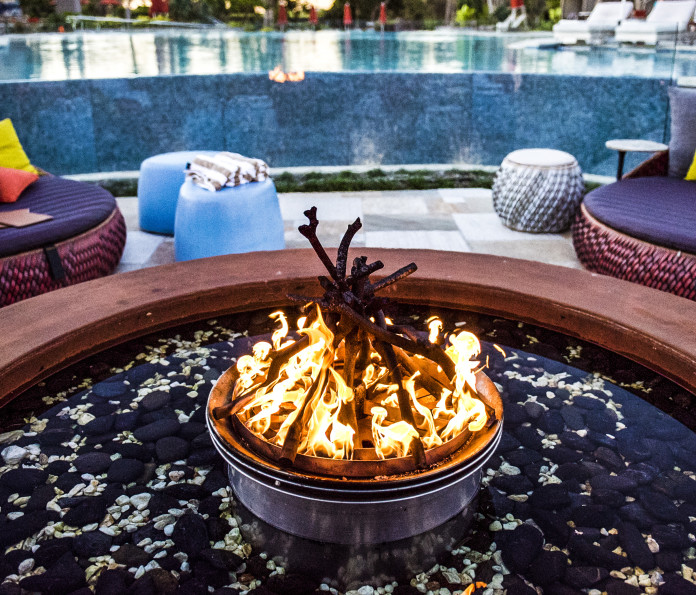 Graze restaurant and lounge at Elements of Byron resort in Byron Bay has announced two exciting additions. A new lunch menu which favours the busy commences Thursday June 23, with fast well priced lunches 12 – 3. And end of week is celebrated once again, with the launch of Fire Pit Fridays on July 1.

The launch of Fire Pit Fridays is about bringing people together at week’s end, according to Dingle-Garciyya. “It’s a rocking space there around the fire by the infinity pool. We’ll be serving some complimentary nibbles between 5:00 and 7:00pm and there will be $1 local oysters freshly shucked to order. Our local inspired cocktail menu is truly something and I advise everybody to make friends with Keon behind the bar”. Justin Dingle-Garciyya trained under Raymond Blanc at Le Manoir aux Quat Saisons and earned his stripes in various hatted restaurants. He has spent the last sixteen years working across the globe in luxury brand hotels including working as Area Chef for Aman Resorts in India and his most recent role as Culinary Director with Morgans Hotel Group, with such brands as The Mondrian in London, Miami and Qatar, Sanderson in London and Hudson in New York. In India and Sri Lanka he generated a strong following with his own cooking show “Healthy Kitchen” on the CNN Network. He has cooked for the likes of Madonna, Mick Jagger, Beyonce, Alicia Keys and members of the British Royal Family including Princess Diana, the Queen Mother, Fergie and Prince Harry.

Justin was recently joined in the Elements of Byron kitchen by his long term colleague Paolo Sanapo, who came from The Mondrian in London after surviving the kitchens of Gordon Ramsay.

Graze restaurant and lounge opens for breakfast, lunch and dinner seven days, with seating inside by the fire, outside on the terrace overlooking the infinity lagoon pool or in the private dining room for sixteen. Graze Bar serves fine wines, bespoke cocktails, Marvel Street Coffee and a bar menu 11:00am – late inside around the aquatic inspired bar, in the lobby lounge and outside around the fire pit.