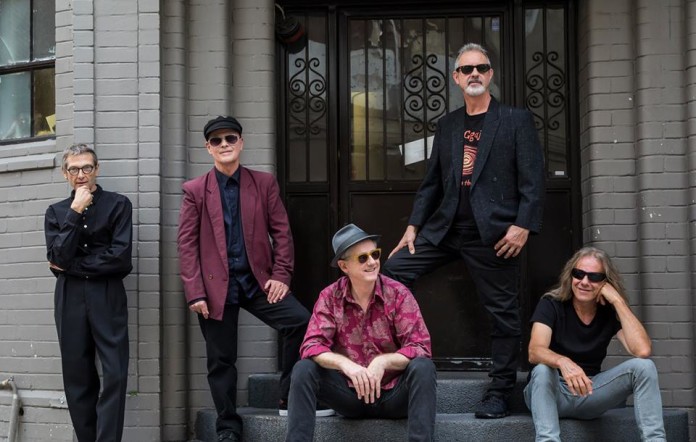 August 2016, GANGgajang release their new single, Not Waiting Around, in the lead up to the band’s Spring/Summer Not Waiting Around Tour. The video for the song was filmed and recorded earlier this year at a live performance at The Basement in Sydney.


Late last year, the band’s remaining four original members Mark ‘Cal’ Callaghan, Graham ‘Buzz’ Bidstrup, Geoff Stapleton and Robbie James, along with bassist Peter Willersdorf, returned to the studio for the first time since the passing of original member, bass player, Chris Bailey. In March 2016, they released the first new single from this session, Circles In The Sand. The song’s striking music video was shot in front of majestic Uluru, and in doing so, they are the first band to be given permission by the traditional landowners to shoot a music performance video at the sacred site…

GANGgajang has been part of the Australian music landscape since 1984; the band’s self-titled debut album released in 1985 produced the hits Gimme Some Lovin’, Giver of Life, House of Cards, The Bigger They Are and the perennial Sounds Of Then (This Is Australia).

These singles climbed the charts to become part of the music revolution reinventing the Australian sound: a sound based on our stories, our places. GANGgajang is now regarded as one of the all-time classic Australian albums, while Sounds Of Then (This Is Australia) has reached near mythical status and continues to connect with new generations of Australian music fans to this day.

Their self-titled album has been remastered in 2016 and re-released as GANGgajang Remastered. When the album was first recorded, it was mastered for vinyl, as the digital era had only just begun, hence the urging to remaster this classic Australian album, three decades later. Their two new singles, Circles In The Sand and Not Waiting Around have been added as bonus tracks to this release.

The band is planning to return to the studio to finish recording the remaining tracks for a new album which was due to be completed this year, but is now looking to be released in 2017.