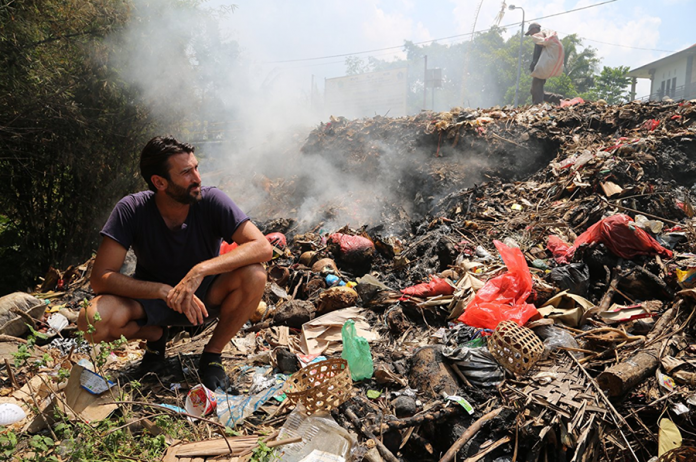 The ocean along the North Coast of NSW – including, famously, Byron Bay and other popular tourist destinations – is a sparkling, inviting, and above all clean body of water.

It is played in an on by crowds of people every day of the week, drawn by its pristine freshness.

But the oceans globally are in a bad way, and under serious threat, from industrial scale fishing, habitat destruction, species loss and pollution.

In the past three decades, coral cover on the Great Barrier Reef has halved. More than a third of fish stocks in our waters are now over exploited or have status “unknown”. And this year alone, 50 million plastic bags will enter the litter stream from Australia, making our country the second largest waste producer, per capita.

That plastic is having a major impact on marine life. On Lord Howe Island, it fills the bellies of 90% of sea birds. Our addiction to plastics also drives petrochemical industries, which expand into our seas and compound the problem. Oil and gas exploration into areas not yet declared marine parks threaten critical habitats.

Australian scientist and factual program-maker Karina Holden has made a bold and beautiful film that looks at these problems in all their unpalatable detail.

This is Holden’s first feature length documentary destined for the cinema and it’s like no film about the ocean you’ve ever seen.

It unveils the shocking truths, taking us into the ocean realm where we witness ocean change first hand.

Just on the Australian scene, we see how commercial fisheries and shark finning on the Great Barrier Reef impact their survival, and the cost of drumlines off our beaches not only to sharks but other creatures.

There’s a fight on to protect Bremer Canyon off Esperance, home to our largest killer whale population and the biggest white sharks on record, Bremer is about to have its fate decided. Our greatest natural treasure – the Great Barrier Reef – is only holding on to its status as a place of World Heritage.

But despite the bleak story, Blue finds hope in the new generation of “ocean guardians” who have taken up the fight for the planet.

The film is a provocative mix of scientific essay, investigative journalism and arresting imagery, poetic and awe-inspiring.

Blue screens at the Pighouse Flicks for five nights during the Byron Bay Film Festival.

THE FESTIVAL
The Byron Bay Film Festival is illuminated with two dazzling red carpet gala events in the heart of town. Opening Night offers a chance for industry networking and a taste of the flavour of the festival to come, and features a highlight film screening. The culminating celebration event is an exciting night of recognition for filmmakers, the festival, Byron Bay, and the international film industry, and not to be missed. Early ticket purchases are recommended to avoid disappointment to these two popular events.

Program is out now.

Tickets are on sale now via www.bbff.com.au