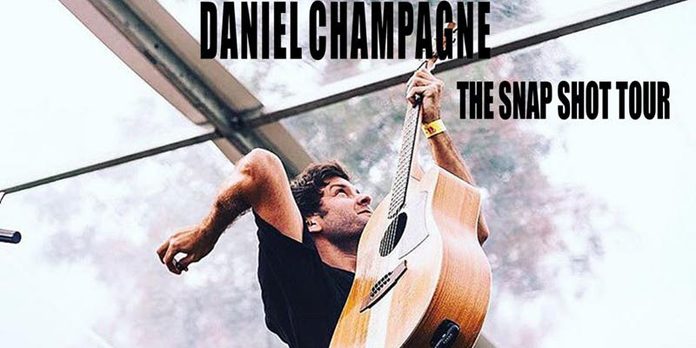 “Daniel Champagne exudes a natural ease on stage, as he sings poignant lyrics and beautifully crafted melodies that invariably whisk the heart up with grand romanticism. Coupled with an exhilarating guitar talent that transcends mere acoustic playing to replicate a whole band, Champagne is just magic.” (themusic.com.au)

Daniel Champagne is established as a world class and internationally renowned performer. How many Australian-born artists can spend the majority of their year touring the globe and selling out show after show in North America, Canada and Europe? And doing it tour after tour after tour?

Not many is the answer.

And in between Champagne finds just enough time to broaden his following in Japan, South America, Mexico and other countries. Oh yes, and then return to Australia and New Zealand for the sort of touring that virtually no other artist can do in 2018.

This comes after Daniel completed a sold out Canadian tour,  was a finalist in the International Songwriting Competition, and  officially showcased at the recent  Folk Alliance international conference in Kansas City.

And this headlining national tour starts almost immediately after a run of Australian theatre shows as special guest with Rodrigo Y Gabriela.

Daniel Champagne is not afraid to – and in fact loves – playing both the biggest and smallest stages, cities and towns. That’s perfectly evidenced by his exhaustive April/May/June tour where he plays a seemingly endless array of diverse locations – from capital cities to regional areas.

That’s what Daniel Champagne does. He takes an astonishing live show – he really is one of THE finest guitarists on the planet – hops in cars and planes and takes that show to people who want to see him.

Daniel Champagne has evolved naturally and through relentless hard work into a truly international performer with an intensely devoted audience – people who love real music, astonishing guitar playing, great songs, and an artist who knows how to combine all these elements into a magnificent live show.

And it’s the same show on a tiny makeshift stage in a remote country town as it is at any of the world’s major festivals, or on concert stages with the likes of Lucinda Williams, Judy Collins, the John Butler Trio or any of the other artists Champagne has performed alongside.

The SNAP SHOT TOUR will see Champagne performing songs from his acclaimed Fault Lines album plus other favourites and new songs.

As an added bonus a Snap Shot album will be sold at this shows. There will only be 1000 copies of this limited edition mix tape of location recordings captured live and real over three days in early January on the far south coast of New South Wales. It includes some new songs, some new versions of old songs and some covers.