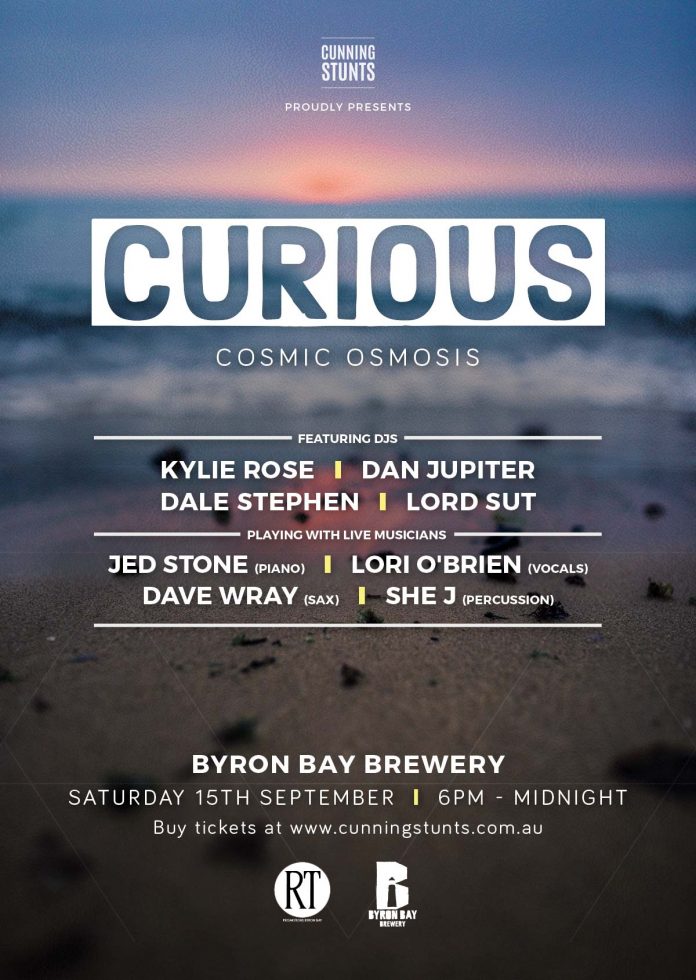 CURIOUS – absolutely! Experience the new concept night presented by Cunning Stunts, where you can expect the unexpected and experience their version of Cosmic Osmosis. A melting pot of electronic stew, global grooves, dubby disco, and heart-opening house. Taking you to a higher concentration and feeding nutrients into your souls, DJ’s will be playing epic sets with live guest musicians;

World renowned DJ / Percussionist / Producer SHE J will be joining Kylie on percussion. Locally based, SHE J currently plays with Tijuana Cartel and has also played with Ash Grunwald and Deya Dova. Talented across multiple genres, SHE J’s repertoire of Afro, Electronica, Deep House, and Tech house will join forces with Kylie’s selections and send us all soaring to the stars.

Dave Wray (sax) is a gifted and in demand Saxophone player, who is also known as Frank Bennett an Australian jazz singer, musician and songwriter, whose vocal style is influenced by those two singers and the music of the 1940s and 1950s. His version of “Creep” was listed in the Triple J Hottest 100, 1996. He has received multiple nominations at the ARIA Music Awards. He plays a mean Sax and will be collaborating at CURIOUS with Jed Stone (pianist) and DJ Lord Sut.

Lord Sut is the founder of Cunning Stunts and the weekly radio show Solar Love Machine on BAY FM. With a varied and deep musical taste, Sut knows how to gratify and satisfy with an effortless blend of chill, dub, soul, funk, electronic, cosmic, leftfield, disco, indie and house. If you want one word it’s Balearic. If you need two, add eclectic.

Lori O’Brien aka LФR L’AMФUR sings up the love and more with a lot of groove; being a lyrical, sassy and soulful song bird of originality. Her voice is filled with melodies, rhythms and raps and will tap you right into the heart of you! Lori has performed with many artists, recently creating an auditory osmosis with DJ Dale Stephen at a private party – we can’t wait to see what these two have brewed up for us!

DJ Dale Stephen is a founding member of Cunning Stunts, co-pilot of Solar Love Machine on BAY FM, resident at LaLaByron and founder of Electric Larry records. He is an Australian DJ, producer, musician, promoter, and electronic music enthusiast. His delicious sets consist of Deep Disco, Nu Funk and dubbed-out-Disco-House interspersed with his own lauded edits and original tracks.

Locally based Dan Jupiter – Producer, DJ and lighting designer has over 20 years’ experience behind the decks. Dan is passionate about all forms of electronic music and aims to elevate and bring people together through crafted and sonic mixing with foundations of tribal rhythms and warm bass. Dan will be taking the early helm of our internal lounge room ensuring delightful sounds for all.

In line with all conscious activities Cunning Stunts represent, a percentage of the profits from this event will be donated locally. The recipient of the Spring edition of CURIOUS is Rural Aid founded in 2015 to provide a holistic support program to rural Australia. The donation will be comprised of 10% of the profits, plus the proceeds of a Karma Keg being provided by the venue hosts the Byron Bay Brewery.

Come and get CURIOUS with us :)
ExPecT tHe UnExPeCtEd. JoY, dIvErSiTy, LoVe & CoMmUnItY = Cosmic Osmosis