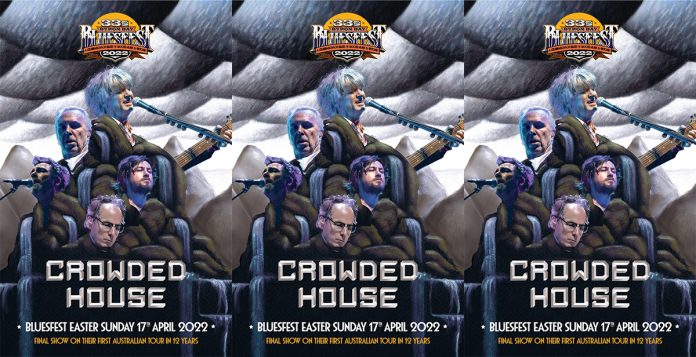 The iconic band, CROWDED HOUSE, has just announced their first Australian Tour in 12 YEARS! We are thrilled to announce that the final stop on their tour is at Bluesfest 2022, on Easter Sunday, 17th of April!

CROWDED HOUSE is a long-standing and much-loved vehicle for the songwriting talents of Neil Finn. Formed in Melbourne Australia in 1985 out of the ashes of New Zealand’s Split Enz by Neil, Paul Hester, and Nick Seymour, their eponymous self-titled debut album on Capitol Records went on to global success with the hits ‘Don’t Dream It’s Over’ and ‘Something So Strong’.

Those songs and many that followed are still resonating with audiences today, the former in particular being one of the most covered songs of the last 20 years.

A new generation has grown up and connected with their songs and will now get to experience the band live as they perform legendary anthems from the band’s 35-year career, along with fresh new music.

To open Bluesfest there will be a very special night, ‘THURSDAZE’, on Thursday 14th April.

All ticket options plus camping, parking and VIP are on sale now via the Bluesfest website.