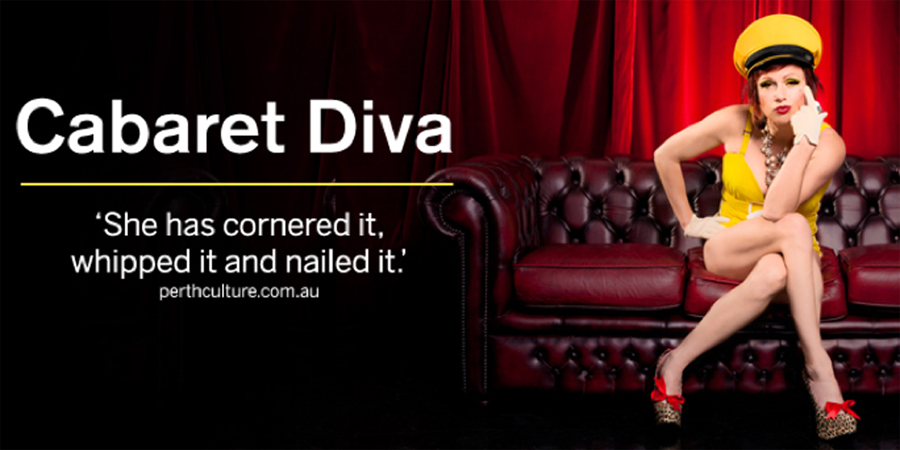 Lock up your liquor cabinets and drag out your glad rags! Two powerhouse divas – Christa Hughes and Bethan Ellsmore – are headed to NORPA for a double bill of songs, sassiness and subversive behaviour in CABARET DIVA. Frock up people – this is going to be a wild night of fun! Best fancy dressed competition at the NORPA bar after the performance on Friday 8 May. Great discounts for groups of 4 or more so make a night of it with a group of friends.

CHRISTA HUGHES in Beer Drinking Woman
With the mesmerizing voice of a mermaid wooing ships onto the rocks and a dash of 1920s bravado, singing sensation Christa Hughes (Machine Gun Fellatio, Circus Oz) is coming to Lismore exclusively to perform at NORPA, following her recent sell out shows at Sydney Festival. As a ‘lush’ she takes us on an alcohol-drenched journey from the tingling buzz of that first elegant sip all the way through to the hair-of-the-dog hangover blues. Accompanied by pianist Leonie Cohen, they perform some of Christa’s own liquor-laced compositions as well as songs by Tom Waits, Memphis Slim, Cold Chisel, Dinah Washington and more. Come on in, wet your whistle and sink another with the Dive Bar Diva.

“To every female performer who has tried to put together a one-woman cabaret show: give up. There’s one woman who has mastered it, and the rest of us should throw our hands in the air and walk away with our pride still intact. She’s defined it, cornered it, whipped it, and nailed it. Twice. With a big hammer.” Perth Culture

“She’s exuberant, she’s inventive, she’s exciting and, above all, she kind of gives vulgarity a god name” Barry Humphries

Supported by BETHAN ELLSMORE in Queen Of The Night
Under the cover of darkness, anything is possible…

Bethan Ellsmore is a curious urban fantasist who insists that you can sing Mozart, The Strokes, Weill and Sia in the same soiree. Join her in a seductive and slightly silly cabaret as she takes you from the frivolity of an operatic dream to the murky reality of a nightclub weaving stories of aching hearts and heartfelt abandon. Straying from the safety of the babes of Babushka Cabaret, Bethan wanders the heady streets of her urban existence, dodging dangers and finding joyous moments of revelry, shared with the audience through arresting arrangements of arias, music theatre, pop songs and her original music.

“On stage Bethan is captivating. She has a carefree, ‘take me as I am’ manner, which makes me watch her even more. Ellsmore switches from violin to playing the keys to belting her own original number to ‘pinging’ top Cs (or higher) with ease.” Sarah Knight, XS Entertainment.