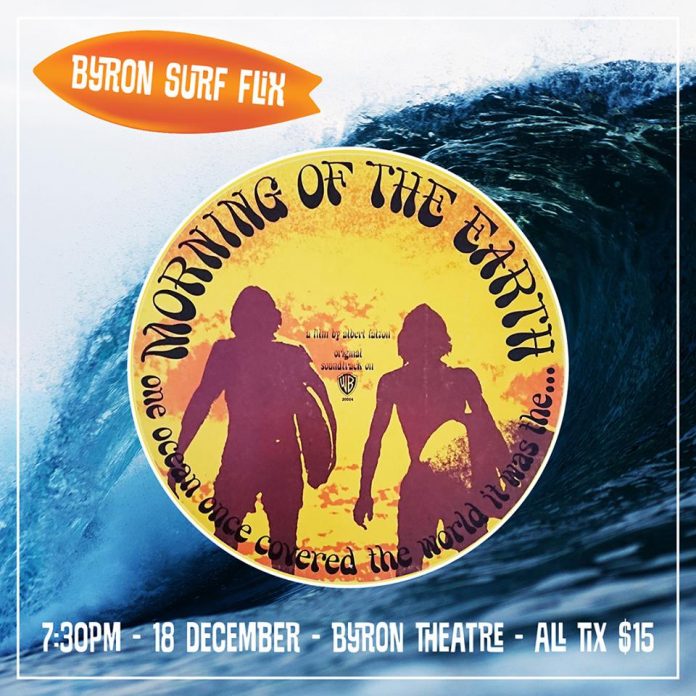 Byron Surf Flix gets on board with Positive Change for Marine Life to support our local surfers at the Byron Theatre on Tuesday 18th December at 7:30pm.

Byron Surf Flix takes off with the screening of surf film classic ‘Morning of the Earth’. The film will be introduced by Rusty Miller who is one of the surfers who appears in the film.

The night promises a chilled atmosphere with the Byron Theatre Bar open before the film and during intermission.

‘Morning of the Earth’ portrays surfers living in spiritual harmony with nature, making their own boards as they travel in search of the perfect wave across Australia’s north-east coast, Bali and Hawaii.

Check out these clips from Morning of the Earth: https://youtu.be/NIO9sw1w9vI

Surf Flix co-organiser Daniel Wilson Barrios, a surfer of over 20 years, says that Surf Flix will be “somewhere we can bring together the surfing culture and to celebrate what we love to do”. Daniel also mentions that Surf Flix aims “to be able to sustain the ocean and to keep it clean so that we can keep surfing in it”.

Following its premiere on December 18, Byron Surf Flix is planning on becoming a monthly feature at Byron Theatre. Screening on the 3rd Tuesday of every month, Byron Surf Flix will become a regular spot to check out the best surf flix for Byron Bay’s surfing community.