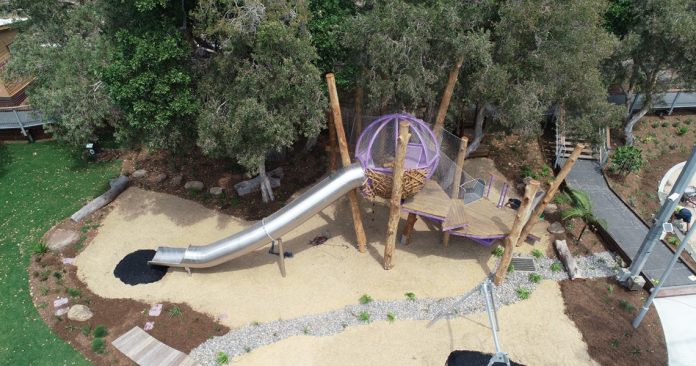 Railway Park was named a winner in the Parks and Open Spaces division and the bespoke playground won an award in the Play Spaces section – both were the outstanding work of local landscape architect firm, Plummer and Smith.

Byron Shire Mayor, Simon Richardson, said the awards were due recognition of a project that was not only the first project to come out of the Byron Bay Town Centre Masterplan but it has reinstated Railway Park as the heart of the Byron Bay CBD.

“Railway Park was tired and not used by locals and the Byron Bay Masterplan Group, with the financial support of Council, set a the goal of refurbishing the park to turn it back to the welcoming, open and green community space that served residents and visitors to Byron Bay for decades,” Mayor Richardson said.

“Community input was key to the project and after 18 months of design work and 7 months of construction, the $2.1 million park was unveiled to locals with a beautiful celebration in November last year.”

“The redevelopment included the preservation of the old Cottonwood trees that are a magnet for children, as well as a play area that boasts a great slippery slide, a terrific birds nest that is just the right size for a handful of kids and stunning artwork by local Arakwal artists,” he said.

The design was the work of landscape architecture and design studio, Plummer and Smith, along with Council staff and the following consultants and contributors:

“This stellar team of people worked so hard to make sure the park represented the wishes of the local community and congratulations to everyone involved,” Mayor Richardson said.

Plummer and Smith also won a Regional Achievement in Landscape Architecture for the project.

The next project in the pipeline involves opening up the rail corridor as community recreation space and connection between the centre of town and the western side of the corridor. Plummer and Smith are working on detailed designs for this work and Council hopes to begin construction later this year.