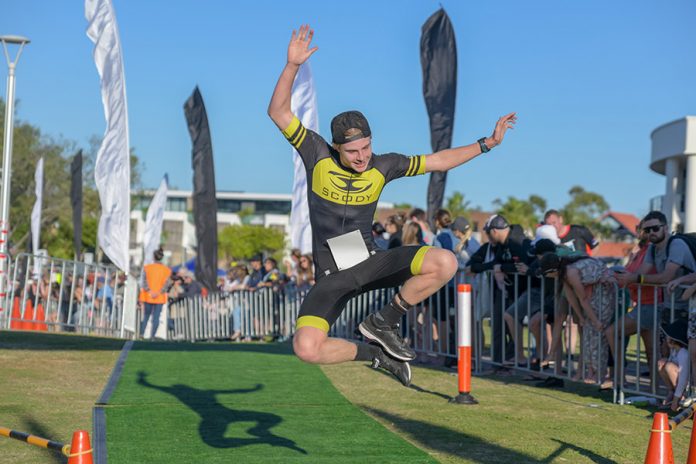 The 24th edition of the Byron Bay Triathlon returns to town on Saturday 11 May. An expected field exceeding 1100 athletes competing in Tempta, Sprint and Olympic distances will be joined by 100 juniors, many of whom will be competing in their very first triathlon.

The Triathlon marks the final event in the Triathlon New South Wales Interclub Series, which has seen teams from Coffs Harbour, Yamba, Port Macquarie, Ballina, Hat Head, as well as the local Byron Tri Club battle it out across the region. Hat Head Hammerheads are the current leaders but the Byron Tri Club hope the home town advantage will give them the added edge to win the top of the podium.

“The Interclub competition has been a great driver for members especially those new to triathlons”, says Deb Fuller of the Byron Tri Club.

“The races leading up to the final have provided them with confidence to tackle an Olympic Distance and being on home soil for the Byron Triathlon is generating a lot of extra enthusiasm.”

The course will remain the same as last year, which has overcome previous issues and will provide a unique setting for athletes of all abilities to compete.

“We are pleased to once again organise the Byron Bay Tri,” says Race Director Mike Crawley.

“We are excited to see so much enthusiasm from local businesses, offering promotions and incentives to athletes to welcome them to the community and increase economic benefits throughout town.”

The event organisers thank local residents and businesses for working with the event despite any inconvenience caused by road closures from 11.00am to 3.30pm towards Suffolk Park; and until 4.30pm in the CBD.

More information can be found at www.byronbaytri.com.au.