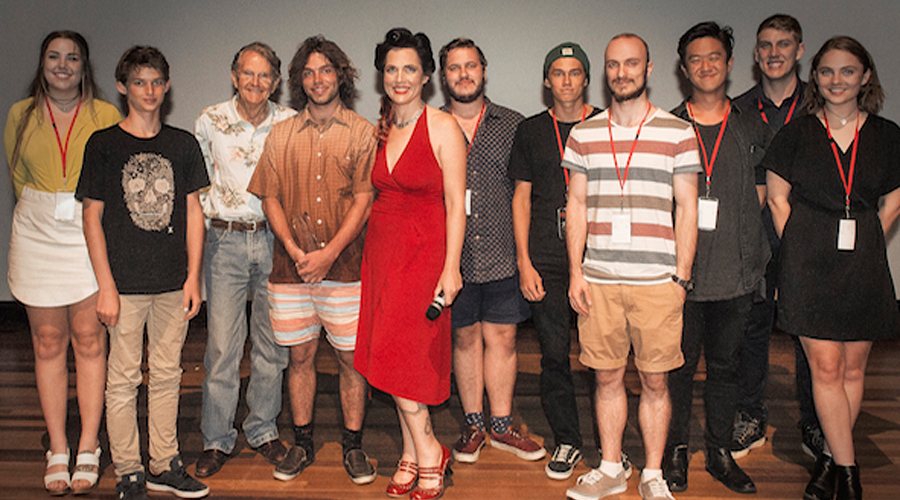 More than 100 young Australian filmmakers entered their work in the Byron Bay Film Festival this year, hoping to have their films shown alongside those of masters of the medium such as Wim Wenders and Tony Ayres, and to rub shoulders with stars of the calibre of David Wenham and Jack Thompson on the BBFF Red Carpet.

Australian Directors aged under 25 and as young as 13 travelled from all over Australia to attend the festival.

Ten of their films were selected as the final nominees, all of whom attended with their films screened in a special session judged by former Channel 9 Film reviewer Peter Thompson.

He chose Queenslander Brodie Poole’s Flight of the Buffalo for the top gong.

“The calibre of films made by up-and-coming talent from all over Australia was outstanding this year,” said Festival Director J’aimee Skippon-Volke, “yet Brodie’s work shone strongly as the main contender, because his style is unique, quirky and universally engaging.

“We are very keen to see the work he will be creating in the future.”

The anti-CSG mining film Frackman picked up two awards on the night.

Richard Todd’s documentary story of ordinary Aussie bloke Dayne Pratzky taking on the giant mining corporations played to a packed house during the festival and won the top honours for Best Film and Best Environmental Film, the latter sponsored by the NSW Greens.

The awards ceremony took place during Saturday’s Closing Gala, in which visiting and local filmmakers joined film fans for a waltz down the red carpet and the World Premiere of a documentary on the work of North Coast death activist Zenith Virago.

Zen and the Art of Dying was filmed in Byron Shire by American Broderick Fox (The Skin I’m In) after he met Zenith at BBFF2012 and the film also played to a capacity crowd, as did the Opening Night documentary Will and Testament, an intimate portrait of the life and political career of outspoken socialist MP Tony Benn.

Film fans flocked to the Community Centre theatre on Sunday night to see the documentary about the extraordinary creative community of western Sardinia, Cabras Where Fables Are Born, which brought the festival’s 10 days of intensive screenings, workshops and glamorous parties to an end.

Frackman was one of a dozen films singled out for acknowledgment at the festival.

The Best Byron Film award, sponsored by the Echo, went to Nyangbul woman Lois Cook for her study of the mass killings of her people on the North Coast, Babe in the Reeds: a story of massacres and resilience.

The Slap’s director Tony Ayres picked up Best Dramatic Feature for his tough crime drama Cut Snake and an honorary mention was given to A Fighting Season, Oden Roberts’ drama about the recruitment methods used by the US military.

The 2015 festival was “the most successful yet”, according to Ms Skippon-Volke.

Next year marks the festival’s 10th anniversary and preparations for a spectacular event were already under way, Ms Skippon-Volke said.