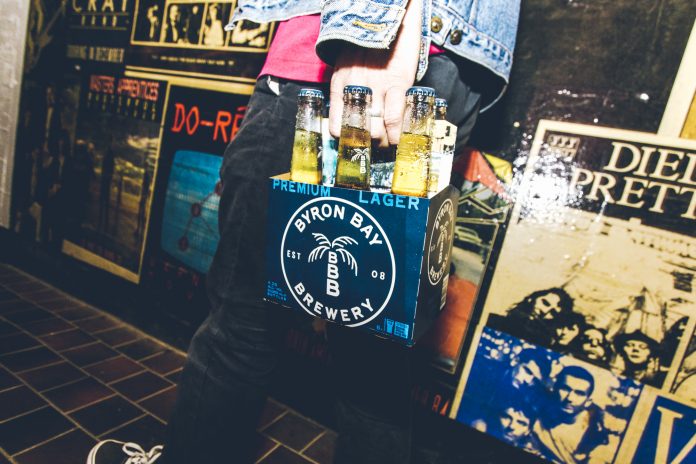 BYRON BAY BREWERY launches a new Premium Lager; a re-brand in collaboration with their friends at clothing label Thrills; and a range of local community and sustainability programs, including Festival of the Seas, which actively cleans up Byron Bay beaches in partnership with conservation charity Positive Change for Marine Life.

Head Brewer Alastair Gillespie first brewed this new crisp and refreshing lager as a seasonal beer to refresh the locals and quickly it became the beer of choice during summer gigs at the venue. Due to its local success, BYRON BAY BREWERY will be launching the beer nationwide this September in time for the hot summer months.

“I really wanted to brew an easy-drinking lager to enjoy during gigs on hot summer days. We brew our Premium Lager with the best Australian pale malt and a blend of zesty hops. It has a light body with a subtle citrus flavour which gives it such a refreshing yet flavoursome finish; the perfect beer to enjoy with a of couple mates after a swim at the beach or while listening to great live music.”- Alastair Gillespie, Head Brewer

You can tell a lot about a beer from the label. For the re-brand launch, BYRON BAY BREWERY is collaborating with local friends and designers at clothing label Thrills to epitomise the creative Byron Bay lifestyle with their new branding.

“It goes without saying that we here at Thrills are beer lovers, and so when the opportunity came up to partner with the Brewery, it really was a no brainer. Our shared passion for all things music, and mutual adoration of our Byron Bay home meant that it was a really easy melding of ethos and ideas.” – Brooke and Tabitha McGregor, Thrills

BYRON BAY BREWERY, previously known as The Arts Factory, has a rich history with over 35 years of live music at the iconic brewery venue, including hosting amazing musicians like The Ramones, Paul Kelly, Crowded House, Sonic Youth, and the first ever Bluesfest held in 1990 – now Australia’s most awarded music festival, which the brewery continues to support and sponsor annually. Today the brewery is still home to great live music alongside a wide range of local craft beers. The brewery has been rebranded and there are plans underway to increase the experience and entertainment on offer at the venue.

This August saw the success of the third annual ‘Festival for the Seas’, featuring a beach clean-up and celebration of the ocean with live music, guest panels and great prizes to raise funds for local charity Positive Change for Marine Life. BYRON BAY BREWERY announces they will double the $1,500 already raised and continue an on-going GOLD sponsorship with the local charity, alongside their latest River Warriors initiative, which will focus on marine debris and water quality monitoring projects on Brunswick River. Stay tuned for public-facing clean-ups to enable a shift in behaviour, addressing the issue at its source.

“Through giving back by supporting Positive Change for Marine Life (PCFML), businesses like the BYRON BAY BREWERY are setting a great example for other businesses to step-up and act, whilst playing a very important role in ensuring that our ocean is conserved for future generations to come. As a Byron-born charity, we have been honoured to have been the major charity partner with the Brewery over the past three years for their Festival of the Seas. Expanding that partnership through becoming a major sponsor of our work will help us to drive long-term outcomes for the ocean, and further engage with our target communities across Byron, the Gold Coast, Brisbane and southern India.” – Founder Karl Goodsell

“This is an exciting time for Byron Bay Brewery, with the new Premium Lager going national for all Australians to enjoy this summer, and plans to host bigger and better gigs here at the brewery. We really value our local partnerships, whether its working with Thrills on the brand re-design, or partnering with Positive Change for Marine Life on some cool sustainability projects like Festival for the Seas. We are committed to building on these partnerships and giving more back to the community of Byron Bay.” – Serge Costi, Marketing Manager Byron Bay Brewery

The Premium Lager will continue to be brewed into kegs at the BYRON BAY BREWERY for the local market and to support national demand, further brewing will take place in Lion’s network of breweries. The new product is 4.2% ABV (1.2 std drinks) in 355ml bottles and will be priced at $18 6-pack and $50 case.