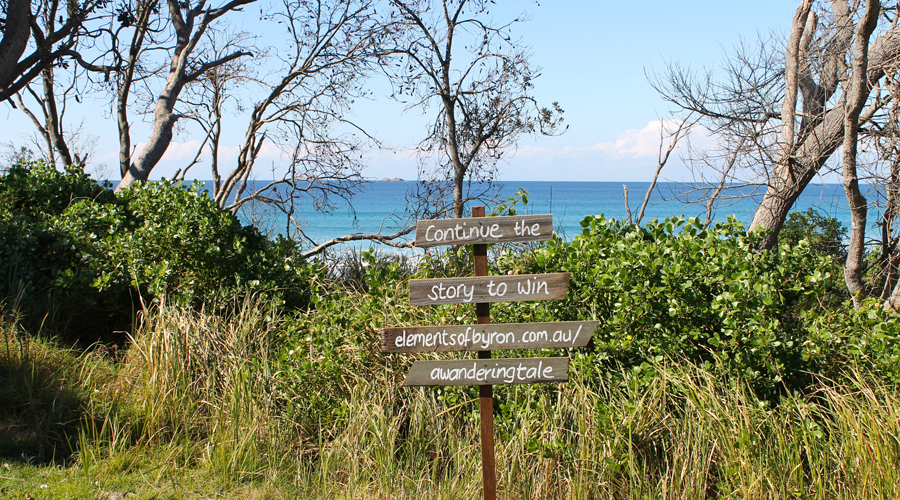 During the three day Byron Bay Writers Festival over 200 people registered for the short story competition being run by Festival hosts Elements of Byron Resort.

“‘A Wandering Tale’ generated awesome interest and complimented the festival perfectly” said Elements of Byron General Manager Leon Pink, who manned the Elements of Byron booth at the Festival along with Development Director Jeremy Holmes. “We were aiming to have a lot of local entries and this has happened. We are all pretty excited to read the entries as they come through”.

The competition seeks an ending to a story of 1,500 words written by renowned Lennox Head Author Lisa Walker. The winning ending, which can be up to 500 words, will be chosen by Lisa along with Elements of Byron Resort owner Peggy Flannery.

Two chill-out areas were set up at the Festival – by the lakeside and at the top of the sand dunes, to give budding authors a sense of Lisa’s story. These were well utilised by both competition entrants and other festivalgoers seeking respite in nature.

“The shady rest created by Elements of Byron I found by accident” said local Peter Mitchell. “On Friday I was looking in the direction of the ocean and saw a grove of trees populated with furniture including replicas of the classic 1960s round chairs. I thought what a fantastic place, so I wandered over and found this beautiful grove of grevillea and other native trees. Then on Sunday after attending a particularly deep session on grief and fiction I went over to the trees for a chill-out and reflection and marvelled again at the shady rest and how it enabled festival participants to observe nature. It is a fantastic part of the festival”.

Elements of Byron also raised over $400 during the Festival from the sale of their signature blend Belongil Iced Tea. These funds have gone to the Indigenous Literary Foundation.

‘A Wandering Tale’ entrants have only until 5:00pm on Sunday August 23 to upload their story ending to the Elements of Byron website. The competition winner will receive 5 nights at Elements of Byron Resort including daily breakfast, eco and food tours and a spa package.

The People’s Choice prize winner will receive 3 nights at Elements of Byron Resort and a 3 day pass to the 2016 Byron Bay Writers’ Festival. Everybody is encouraged to vote for their favourite ending by visiting www.elementsofbyron.com.au/awanderingtale

Elements of Byron Resort is scheduled to open in late January 2016.