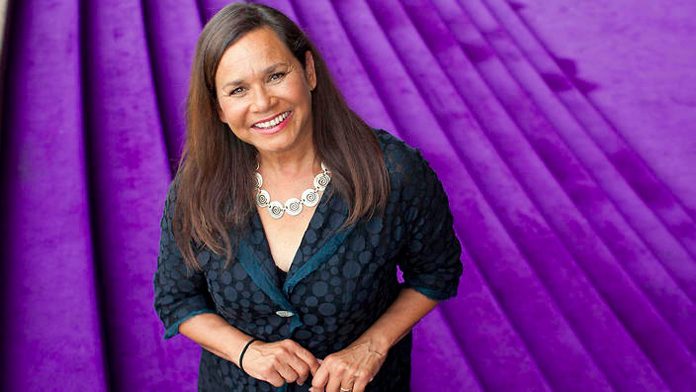 Part of the Helpmann Awards family, the 2017 Centenary Sue Nattrass Award recognises outstanding service to the live performance industry in a field which may not enjoy a high public profile.

“It is with great pride that I congratulate our Boomerang director and curator, Rhoda Roberts AO as a recipient of the 2017 Centenary Sue Nattrass Award. Her commitment to assist Bluesfest in staging the most potent and inclusive series of Boomerang ‘Festivals within a festival’ at Bluesfest each year is one more testament to her outstanding achievements in the indigenous arts community worldwide.”

A journalist, broadcaster, actor, producer, writer, arts advisor and artistic director, Rhoda Roberts has made a substantial contribution to the media, performing and indigenous arts in Australia.

Rhoda is a proud member of Bundjalung Nation, Wiyebal Clan of northern NSW and southeast Queensland. She is currently Head of First Nations Programming for the Sydney Opera House, Creative Director of the Parrtjima Festival in Alice Springs, Director of the Boomerang Festival and associate artist of the Northern Rivers Performing Arts.

In addition to becoming a Director of the Boomerang Festival in 2013, Rhoda was the Founder and Director of the Festival of Dreaming 1995 -2009. She has written, produced and directed some of Australia’s most important public productions and has also been involved with large-scale events including as the Creative Director for the Awakening Segment Sydney Olympic Games Opening Ceremony, the opening of the Musee Du Quai Branly in Paris, the Athens Olympics handover ceremony, World Youth Day and as director of the Garma Festival, produced by the Yothu Yindi Foundation.

Rhoda has been a Board member for Indigenous Tourism Australia, Playwriting Australia and the Australian International Cultural Council (AICC) and in 2016 received an Order of Australia.