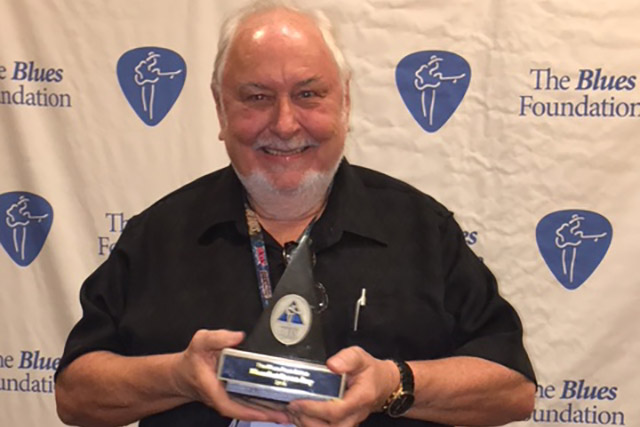 It is a huge honour for Mr Noble and the Festival to be awarded this accolade by the premiere Blues organisation in the USA. Blues Foundation President and CEO Barbara Newman states that “Our 2018 Keeping the Blues Alive Award recipients are all wonderful examples of Blues flame keepers, each working in their own sphere of influence to move the genre forward while honouring its past”.

“When I arrived in Memphis during a snowstorm…. where temperatures reached minus 11 and stayed below zero for the first few days, it was brutal. I didn’t get out at all. However, a few days later in a room full of my peers, along with eleven other recipients, I received the ‘Keeping the Blues Alive Award’ from the Blues Foundation for Bluesfest. I accepted the award on the behalf of everyone who has worked on and performed at the festival over the past 29 years.

It is so amazing to travel to America and be honoured in this way. I started my speech paying tribute to the original custodians of the land, the Quapaw Indians. I then got to tell my music story, of playing in bands in the US, and of my first concert promoting B.B. King at the Paramount Theatre in Portland Oregon, and how his sound system blew up during his first song.

I also spoke about how privileged I felt to travel across Australia and New Zealand in a van over the decades with artists like John Mayall, Canned Heat, Buddy Guy, Junior Wells, Dr Feelgood, Johnny Copeland, Albert King and so many, many more. One of the highlights of my career was working on the Blues Legends of the Mississippi Delta tour which featured R.L. Burnside the first time he toured anywhere! Learning from them, and being a part of the Blues community has been an honour.

I finished my speech describing my visit to Ghana last year and going to the Elmina slave fort. A place of such sadness and horror… yet from those and other slavery castles the African people who came to the US in chains would bring with them their music, which became the Blues in this strange new country, which enslaved them. They created Blues and along with Jazz the first unique music forms in America. The contribution to the arts by African Americans is so immense, we just cannot conceive a music industry the way it is without their multiple ongoing contributions – they created the music which created the music industry we have today. So, I pay tribute to the African American people who gave us Blues, and all the other music that has grown out of it – Rock ‘n Roll, Soul, Funk, R&B, Hip Hop, Rap… and on and on.

As well as to Indigenous people, all over the world, and the music they have blessed and enriched our lives with through their cultural expression.

On this day, I am so happy to have found my life’s work in music… all those years ago. And I still love being a part of it.”

Music lovers from across Australia will visit the beautiful Tyagarah Tea Tree Farm, just outside Byron Bay over the Easter long weekend (Thursday 29th March to Monday 2nd of April 2018) for the 29th Annual Bluesfest. During the Festival they will enjoy 12 hours of music each day on multiple stages, incredible food and market stalls and on site camping in a range of accommodation options.

For the full line up, and all other ticketing information visit bluesfest.com.au.