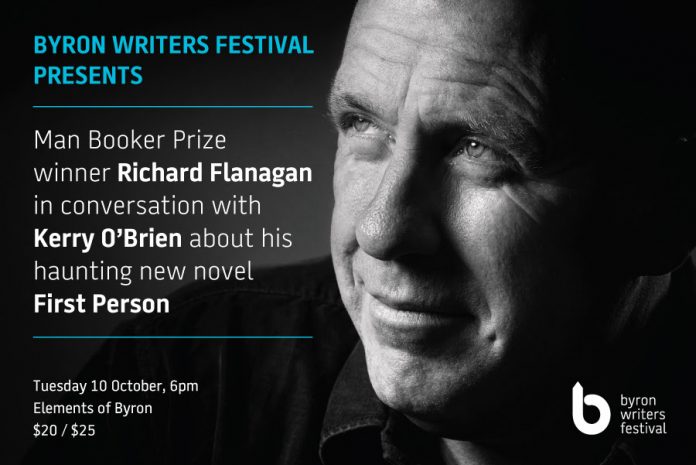 In his first visit to Byron Bay since winning the Man Booker Prize for The Narrow Road to the Deep North, Richard Flanagan will chat with Kerry O’Brien about his haunting new novel First Person at Elements of Byron on Tuesday 10 October.

“We’re thrilled to present this special out-of-season event featuring one of Australia’s most admired authors, Richard Flanagan, in conversation with one of our most revered commentators, Kerry O’Brien,” said Byron Writers Festival Director Edwina Johnson.

First Person tells the story of Kif Kehlmann, a young penniless writer, who is rung in the middle of the night by the notorious con man and corporate criminal, Siegfried Heidl. About to go to trial for defrauding the banks of $700 million, Heidl offers Kehlmann the job of ghostwriting his memoir. He has six weeks to write the book, for which he’ll be paid $10,000.

But as the writing gets under way, Kehlmann begins to fear that he is being corrupted by Heidl. As the deadline draws closer, he becomes ever more unsure if he is ghostwriting a memoir, or if Heidl is rewriting him – his life, his future. Everything that was certain grows uncertain as he begins to wonder: who is Siegfried Heidl – and who is Kif Kehlmann?

As time runs out, one question looms above all others: what is the truth?

Flanagan has drawn on his own experience as a young writer ghost writing the memoir of the infamous John Friedrich – Australia’s then most famous corporate criminal, who committed suicide three weeks after they began working together – to write a book about books, writing, and evil; about truth and lies, the power of fictions to recreate our world for the better – or for worse.

By turns compelling, comic, and chilling, Flanagan takes us on a haunting journey into the heart of our age.