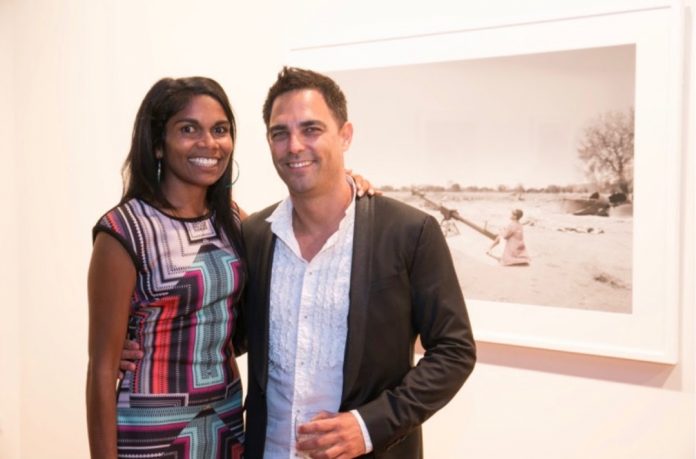 For one night only, view an exhibition of 15 works and talk with Michael Cook – one of Australia’s most exciting indigenous artists.

At BARRIO Byron Bay, guests will enjoy a Brookies gin cocktail on arrival, a tasting menu with matching wines and dessert.

IN CONVERSATION WITH MICHAEL COOK

Byron Arts Magazine is excited to announce the launch of  BAM Art Series Dinners. The first dinner hosted at BARRIO, Byron Bay on Wednesday, October 17 will feature works by artist Michael Cook. Cook is considered to be one of Australia’s most exciting contemporary indigenous artists.

A highlight of the evening will be a conversation hosted by art writer and author Louise Martin Chew, who will discuss the narrative behind Cook’s ethereal contemporary works.

Michael Cook is a Brisbane-based photomedia artist of Bidjara heritage. Cook’s photographs restage colonial-focused histories and re-image the contemporary reality of indigenous populations. Touching on the discriminatory nature of society, his images muddle racial and social roles ‘painting’ a picture of a societal structure reversed. Cook invites viewers to speculate Indigenous cultures living at the forefront, even a majority, rather than manipulated to live within the confines of a white man’s world. Cook’s images challenge our ingrained belief systems yet do not offer judgement – they are observational, asking questions without proffering neat prescriptive conclusions.

Considered to be one of Australia’s most exciting contemporary Indigenous artists, 2016 saw Cook present a solo exhibition at the global art fair, Art Basel Hong Kong. His work has most recently been curated into Indigenous Australia: enduring civilisation at the British Museum, London; Taba Naba, Oceanographic Musuem of Monaco; Saltwater Country at AAMU Museum of Contemporary Aboriginal Art, The Netherlands; and Personal Structures at Palazzo Mora, Venice during the 56th Venice Biennale. Cook’s photographs have also been exhibited in the 19th Biennale of Sydney: You Imagine What You Desire, 2014; the 2nd National Indigenous Triennial at the National Gallery of Australia, 2012; and the 7th Asia Pacific Triennial of Contemporary Art at Queensland Art Gallery/ Gallery of Modern Art, 2013. A number of Cook’s works are currently being exhibited in the group show Colony – Frontier Warsat the NGV.

The Art Series Dinners are bought to you with the support of Byron Arts Magazine, McGrath & Brookies Gin and produced by www.theartconnector.com.au