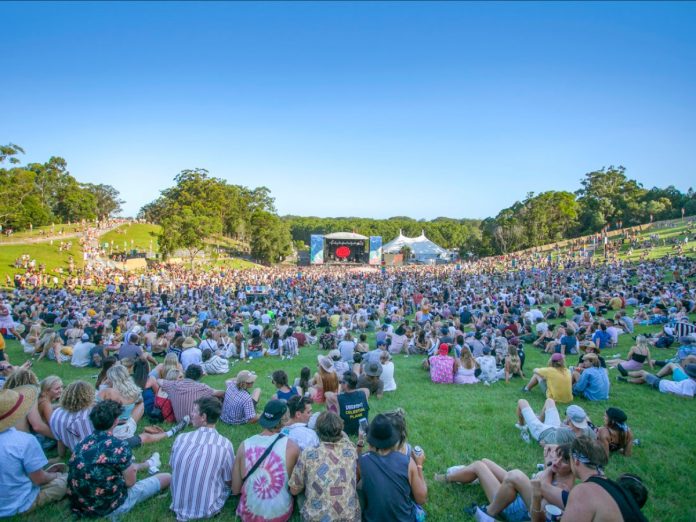 The 6th Falls Music and Arts Festival (31 Dec – 2 Jan) held at North Byron Parklands wrapped up successfully today with organisers praising the relaxed, friendly crowd. The event attracted more than 17,000 patrons, 15,000 of whom camped on the festival site, arriving on December 29 and 30 and exiting on January 3. The Festival opened the campgrounds a day early this year facilitating smooth ingress with no delays. Campers exited in record time with campers off the site by 10am on January 3.

Highlight acts included US hip-hop and R&B sensation Anderson.Paak bringing in the New Year and Hilltop Hoods, DMAs, Chvches and Toto all attracting large audiences, the latter leading the crowd in thousands-strong choruses of their perennial hits ‘Africa’, ‘Rosanna’ and ‘Hold the Line’.

Other festival highlights included the ‘La Henge’ arts precinct which featured a cardboard replica Stonehenge, an epic ‘Cavepeople vs Sabretooth Tigers’ cardboard battle by Boxwars on New Year’s Eve, and the Howl & Moan stage where patrons rocked out to the underground sounds of local punk bands. The Iconic Laundromat was also a huge hit where patrons entered a nightclub via a large washing machine. With temperatures in the high 20s the onsite water park ‘Palm Springs’ was once again a popular destination. Misting tents in the campgrounds also kept patrons cool.

“A huge amount of effort went into creating this festival and we would like to thank all the staff, service personnel, stall holders and our large contingent of volunteers. The festival patrons themselves should also be congratulated for making the 6th Falls Music and Arts Festival Byron such a great experience.”